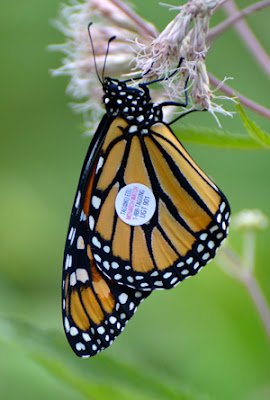 I notice that my last post four years ago in 2011 also discussed monarchs! I hope to have a more regular blog post about lots of habitat garden happenings from now on.

I just tagged our last monarch butterfly on Labor Day.

We bought 25 tags from Monarch Watch and we just happened to have 25 monarchs that were in the migration window. (They don't mail them out until the migrating generation emerges.)

Altogether we raised 55 monarchs this season -- not as many as in the past, but certainly more than the last two years when the population plummeted. We were lucky to even see monarchs at all those years.

We hope this bodes well for the future population, though it still worries me that we're still not planting enough milkweed. The news about illegal deforestation in Mexico isn't good either.

Though I find the tagging process somewhat stressful, I think it provides essential information about the migration that I hope will benefit conservation efforts. I'll be checking the list in the spring to see if they find one of "my" monarchs!

To learn more about monarchs in our yard and elsewhere, please visit our desktop-friendly website at www.ourhabitatgarden.org/creatures/monarchs.html. (Though not technically mobile-friendly, it's fine on the iPad, though a tad squished on the iPhone.)
Posted by Janet at 6:04 PM No comments:

We were surprised to see this one lone monarch in our yard two days ago. I would have thought they would all have gone by now. She spent the night on an old withered-up milkweed plant and was covered in dew yesterday morning.

I moved her onto an aster in a sunnier spot in the garden, and after a few hours she was gone. I hope she makes it to Mexico after such a late start!

Fall nectar
The bumblebees are still going strong, nectaring on some anise hyssop volunteers that started growing in mid-summer. The flowers are beautiful, fresh, and must be full of nectar since there's a lot of bee activity on them. The asters and goldenrods still have flowers, but they're definitely starting to go to seed. The birds should be happy about that!

This year, I've found, though, that the asters, goldenrods, and joe-pyes have started to take more than their fair share of the garden. As much as I like these plants, I've started pulling out quite a few of them so other plants don't get squeezed out.

My other major project this fall is to put plastic plant labels next to all of my plants except the most recognizable and/or prolific. Too many times in the past I've bought new plants only to either forgotten where I put them (probably then pulling out these as yet unfamiliar plants as weeds) or they've been overtaken by more aggressive plants. I know these white plastic T-labels aren't the most attractive addition to the garden, but the benefits of not losing my new plants and not forgetting their names are more important. After a few weeks in the spring, most will be hidden anyway.
Posted by Janet at 12:40 PM 2 comments: 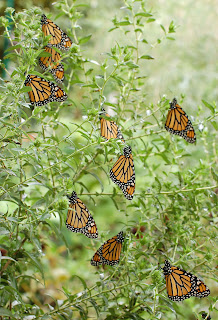 Though monarchs do face many challenges--lack of milkweed, pesticides, degradation of their overwintering sites among others--at least here in Central New York, we managed to find enough eggs in our yard that we're ending up with 200 monarchs!

So far, we've released 155, with 45 still in their chrysalises. Unfortunately, it has rained all day and it's cool, too, so there today's "crop" of 15 monarchs still sit, just where I put them many hours ago.  Monarchs can't do much unless it's at least 60F, but even if it were warmer I suspect the rain would keep them from leaving.

I released them this morning just outside our back door, so they're protected somewhat by being under the eaves. This side of the house doesn't get the northern or western winds either, so I think they'll do fine. I'd be more than happy to keep them inside, but once they've hung around a few hours and their wings are dry, they're eager to leave.

They're just in time for the fall migration, since monarchs leave CNY about mid-September. All our monarchs should have eclosed (i.e. emerged from their chrysalis) by then. They're likely to encounter some challenges on their way to Mexico, especially the drought in Texas that will limit the availability of nectar. And then if and when they get to Mexico, their overwintering habitat is gradually being destroyed by illegal logging and by climate change.

For more info on my monarchs, visit Our Habitat Garden website.